Kentucky Deer Hunts Top the Charts – Anyone know why?


We know that in the 2014/2015 Kentucky Fishery and Wildlife reported a record year of Boon and Crocket Bucks harvested.  This topped the nation in trophy whitetail hunting for the first time.  Can anyone take a guess as to why Kentucky will continue to be one of the best places to book a Kentucky deer hunt with an outfitter?  According to Adley James of Kentucky Deer Hunts .com , Kentucky’s terrain can be very hilly and sometimes mountainous.  Because of these geographic hindrances for humans, this stops the land developers and rural sprawl from infecting the beautiful country side.  Because a lot of Kentucky hunting lands are hilly, it doesn’t make financial sense for developers to start dynamiting and blasting in roads and clearing large hills for subdivision development purposes.  This is why Kentucky deer hunts will continue to be more success in time as compared to the traditional Iowa and Nebraska type of “flat land” hunting.

The farming aspect sand nutrients will of course provide big antlered bucks as humans produce massive amounts of crops for the deer to browse on, but as humans develop and their lands become more industrialized, those deer herds will move on and slowly become non-existent.  Even the best Kentucky kill plots will only help you so much.  Kentucky will always be a safe haven for big bucks because of it’s natural physical features that humans really can’t alter over the course of a few hundred years of efficiency and modernization.  Of course in time, Kentucky too will be a barren place to even expect the best of Kentucky Hunting Outfitters to locate trophy deer.  This may take another few hundred years of development, but the deer herd will someday become extinct, as we all will.  Kentucky outfitters out west are just experiencing a time where humans can see a measurable shift in Kentucky starting to produce the bigger whitetail trophies.  As I’ve said in previous articles, this is also due to the culture of Kentucky and how it may have taken longer for this state to accept deer hunting becoming a mainstream “trophy” Kentucky deer hunt vs. a means to feed their family.

The big picture is that the fact Kentucky deer hunting is now #1 in magazines does not mean there is any real measurable differences that will have an impact on individual hunters. Good old fashion skill, research, and time in the woods will outweigh any destination you feel is “guaranteed” to put you in shooting range of  your whitetail trophy buck. 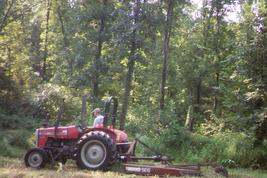