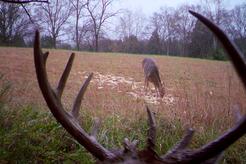 Hunting for Meat or Sport?

How many of you have heard the statement, “I just hunt for meat.  You can’t eat horns”, followed by a Tim the Tool-Man Taylor grunt?  For the initial disclaimer, you can hunt for whatever reason, but if you’re going to make a argument against hunting for trophy whitetail deer, then you argument should make sense.

Under this false premise, you’re actually claiming that it is cheaper for you to:

And the most expensive part of the “hunting for meat” argument is the actual time spent in the woods when you could be out working a job to pay for conventional store bought meat (opportunity cost).   To shoot meat on a Kentucky deer hunt would cost a hunter probably in the neighborhood of  $100 per pound or more?

If you want to argue that deer tastes better than beef, then the rest of the world would have to disagree or else the free market would be demanding more whitetail on the menus.  Not to mention the fact deer are lein. So if the human taste buds preferred lein meat, we would be such an obese culture.  We actually prefer fat.  Deer eat browse, bark and random plant life.  Cows are grain fed.

Now I might buy the argument that deer meat is healthier, but to minimize the efforts of those who deer hunt in Kentucky and bag a bruiser buck, is just a little cheap in my mind.  Whether using a Kentucky hunting guide or randomly going into an uncles corn field and shooting a doe, you’re doing something humans have done for hundreds-of-thousands of years.  You’re on this earth for just a second, so if you’re in the outdoors hunting or on the water fishing, you’re one of “my people” who get what it means to live.