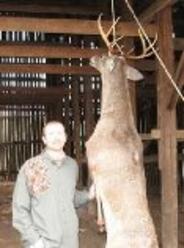 I was recently told by a respectable Kentucky hunting outfitter that there are only 5 or 6 legitimate outfitters in the entire state of Kentucky.  We had a gentlemen’s debate over his comments.  The implication being you are only can be considered an outfitter if you charge $3,000 to $6,000 or more per hunter was what I gathered from the conversation.  Maybe if your cabin was in the range of $100,000 to $500,000.  That is really the impression I was left with.  A lot of these people with access to lots of land lease farms from the random elderly who do in fact have big Kentucky deer roaming their land.  I won’t knock them one bit!  This is how it’s done and there is nothing wrong with that at all.  It’s a little offensive because I actually own my deer ranch and have spent countless hours and lots of money pouring in the lime, pouring on the fertilizing, using a bulldozer to carve out the perfect 13 foot plots on the property.  From digging stagnant water ponds and keeping the minerals heavy to making sure the auto-feeders are spitting out corn regularly in preparation for the upcoming Kentucky deer hunts.  Not to mention the push around my several mile neighborhood to only shoot 130 inch 8 point bucks are bigger.  From quality deer management signs being posted on the roads to busting poachers, I spend about 60% of what I make as a school teacher making this the perfect Kentucky deer hunting property.  I’m not sure what a Kentucky outfitter means; if an outfitter means to make you food, then they’d be called “chefs”.

When paying for a Kentucky deer hunt, my philosophy is that it’s all relative.  If you have 10 farms you sell deer hunts on, then you’re going to sell to 10 times the number of hunters.  In the end, success rates will be the same and everyone enjoys themselves.  We’ve all been traveling and stayed at places with different amenities.  I will not be gutting your deer for you, but you can drive 5 miles to the processor and pay them $10 to do it for you.  They’ll cut off the horns on the spot or prepare the cape for a shoulder mount and ship it to you.  Some full-service Kentucky hunting outfitters do all of this for you.  They are great, but everything has a price doesn’t it?  Kentucky deer outfitters are across the spectrum in Kentucky.  Decide what you’re willing to do yourself and what you’re willing to pay for, then choose your Kentucky whitetail trophy deer hunt from there.  You can count on anybody selling you a deer hunt though probably spends just as much time as the next Kentucky outfitter in the woods and on the property trying to make it the best Kentucky deer hunting property.