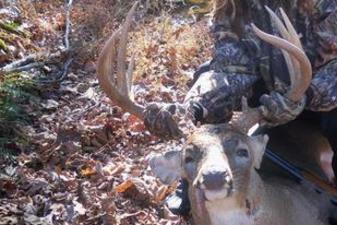 Let’s first list the potential candidates for being considered the best kill plot:

You’ll hear stories and articles from everyone making claims of this being better than that because they watch their deer year after year “choose X over Y”.  It’s a little more complicated than that.  Simply putting in more fertilizer or having a higher PH could attract deer to eat certain foods or another.  The simply truth is that the differences tend to be marginal and not worth the “new game manager” or inspired hunter to base their decision on those findings.  If you’re looking at planting a 1 or 2 food plots, then you’re putting a lot of eggs in one basket and you want to set yourself up for the most bang for  your buck on the next Kentucky deer hunt.  So, what food plot do you pick?

You’ve heard of Einstein and the theory of Relativity, but there is a biologist, Christopher Simon, that has his own theory of relativity.  Foods plots are only as good as what’s in the surrounding areas.  If we all agree that the best food plot to deer hunt over in Kentucky is standing corn.  Do you think your ½ acre of standing corn is going to attract bucks when there are 500 acres of standing corn on each side of you?  What food plot to plant is all relative to what your neighbors are planting.  If you are surrounded by open land of the worlds best food plots, then you need to plant nothing!  Keep your property wooded for cover and do some hinge-cutting.

Let’s say with everything being equal, no money consideration, no neighbor or hard upkeep considerations, if none of that stuff matters to you, you’re probably best off stripping your food plot(s) and trying different foods that work for you.  I was going to generalize, but you really can’t unless I know how much land you have, how many food plots, how big are the food plots, etc.  At my property I like 5+- kill plots, another 3+ food plots strips with kill plot vegetation and a staple of alfalfa and clover.  I’ve been using a lot of cereal rye in a few plots for it’s soil building properties, but also for it’s green late season appeal.