Size of Buck to Shoot with a Kentucky deer hunting Outfitter

This is one of those questions that pertain to “relativity”.  I have a friend who runs a deer hunting outfitter operation with about 240 acres in Illinois.  The deer they hunt are absolute beasts and they penalize their hunters $100 for every inch under 140 inches.  These are some strict requirements.  When choosing a Kentucky deer hunting outfitter, you need to be mindful that more times than not the price ($$$) is associated with how big of whitetail you shoot.  This only makes sense right?  There are some variable during a Kentucky gun hunt or  Kentucky bow hunt that make it a little exciting.  They call it hunting and not shooting for a reason.  There are luck factors and always a chance that monster will appear from nowhere during you $1,000 Kentucky deer hunt.  The percentages just go down in relationship to the amount of time you spend in the woods vs. the success rates of the gun hunters and bow hunters.

Other variables come into play when hunting Kentucky deer.

-how far are you from a big city:  If you’re Kentucky deer hunt is taking place within 10 miles of a large city like Louisville or Lexington, then don’t expect to get a lot of shots off during your gun hunt.  However, if this is your “home” Kentucky deer hunting property and you get the opportunity to shoot a small 8 pointer from time to time, that is awesome and a trophy!  It’s all relative to where you hunt.

-how many small acreage owners surround your deer hunting land:  I think it’s obvious the more 10 acre tracts of land you have around, the more hunters will be in there trying to shoot a deer.  Their expectations will be considerably lower because they won’t see too many deer on a small tract of land like that.  Similarly these deer hunters don’t mind inviting more of their friends over to hunt because they realize the deer isn’t “theirs”.  They can’t really have a big impact on the deer herd in the area.  These people who Kentucky gun hunt are technically correct as it pertains to themselves individually, but if you put all those who enjoy Kentucky deer hunting together and get them on the same page, it would produce amazing results.  It’s the same as no one person’s vote when voting for the US presidency will really matter unless the election is decided by 1 vote.  And even then that person’s vote could merely produce a tie and “he” could still lose (ignoring the overall electoral college conversation).

-If you’re hunting state land in Kentucky, then your expectations should be lowered considerably.  Any buck you shoot is an accomplishment.

-The age of the the person going with a Kentucky deer hunting outfitter is important as well.  Is it your first buck?  Second buck?

I just wanted to shed a little light on relativity.  The more experienced of a Kentucky deer hunting pro you become, your standards should raise over time.  It’s a growing process that allows all hunters to achieve some level of personal success.  Certainly if you’re paying  a Kentucky deer hunting outfitter good money, your whitetail trophy expectations should be rather high. 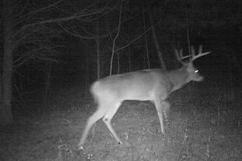