Nobody is going to book a hunt based upon getting free ammo to using during a Kentucky  trophy deer hunt.   In fact, ignore everything I say below about ammo...lol.   I wrote this stuff years ago when I was a SEO guy and wanted the traffic from the always favored indexing of the word "free."  If you're relatively close, or know someone who lives in Kentucky, please come down with 4-wheelers and take a tour of the hunting lease and grounds.  100% of people who come and see the conditions and foot plots they'll be hunting book hunts.

​​Want to know how to get  a free box of ammo for your next Kentucky deer hunt?  It's simple, book a gun hunt with  me and you'll see my cabin is quaint in the woods, but all the little stuff such as spare gun ammo for you will be present to use. Deer hunters get excited and forget the dumbest things and I try to have everything there for you just in case!

Make no mistake about it, I thought I have only needed three or four rounds before when I go out on the Kentucky deer hunting land.   Being the crack shot I think I am; however, never again will I go in the woods without five shells or more!  A distant monster, walking with twigs everywhere, these sorts of situations happen.  A running deer we know better than to shoot at, but a walking deer at 300+ yards away, is not out of the question.  I had a shot at this Kentucky trophy deer that I thought was clear, but I missed.  This deer just stood there; I missed again.  It circled around some trees, appeared again, and I missed again.  Deer hunting in Kentucky is not that tricky, but I did finally make a successful shot.

Deer hunts in Kentucky on land leases are becoming more and more popular.  It is important that you get to see the property you are hunting and make sure it's a place you want to deer hunt.  There are so many wonderful places to hunt Kentucky trophy deer, so by no means am I knocking any one of them.  I would say any place that takes the time to manicure their property to make it the perfect hunting lease is a place worth checking out.  If you are in a position to pay for a Kentucky whitetail outfitter, I would say you are sitting in a good place in life.  This is going to be a great experience no matter where you decide to hunt in Kentucky. 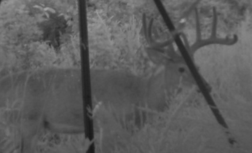