For those of us in working-class, we don’t really shop for “cheap hunts," but we all shop for the best bang for our buck.  Even people worth over a million dollars are “poor” in their own mind.  They are just as cheap and look to save money wherever they can.  Millionaires do not have money to throw away either!

Because Kentucky outfitters are in for long-term wildlife management and to sustain quality hunting, they have to balance between the following things:

#3)  How much they charge per hunter

#4)  What is an acceptable success rate

So let’s explain the value put on each whitetail and how it relates to success rates of previous hunters.  Any Kentucky trophy deer outfitter has a maximum allowable bucks they can harvest each year in order to maintain a good population density of mature bucks.  I’m going to ignore how a lot of these outfitters lease random pieces of land and sometimes these random chunks of land do not get re-leased the following year.  So, these farms with expected non-lease renewals will get over hunted and more deer than normal will be harvested.

With a Kentucky hunting outfitter having a 30% success with 20 hunters, that means 6 deer have been shot.  With 20 hunters paying $2,000 per trophy whitetail hunt, that would come to $40,000 gross.  $40,000 divided by 6 total deer harvested means each animal has a value of $6,666.  That’s probably a reasonable figure an outfitter would sell those deer for.  If his success rate was 90%, then his deer value would be $2,222. The higher the success rate, the more you risk devaluing future hunts exponentially should the mature buck deer density not be able to support those high success rate numbers.  Keep in mind, in a different article I’ll be talking about success rates vs. kill rates, but think about the concept of “management does.”  Do you think the hunting outfitters would calculate shooting does (100% success rates) into their calculation?  Just a thought to consider.

This is all a tough conversation because it relies on unverifiable information.  I could guess on my success/opportunity it rate, but I know I'd want to stretch the truth. How easy is it to say "40%" or "80%"?  It is super easy, but I never have and never will quote a success rate.  "I am a school teacher for a living.  We don't walk people to stands or cook food for them.  Some people shoot them and some people don't." 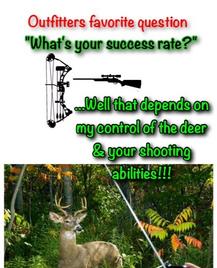