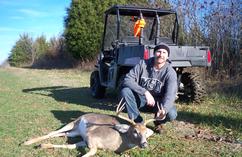 Deciding on what the “best gun” to own is a good conversation to have a deer camp.  To limit the scope of the debate, we need to define that we are trying to decide on the best caliber of gun for North America Hunting.  There are some placed out west and in the mountains that you might rather have a .270 or even a .223 for that speed.  The faster the bullet, the less of a drop you have to deal with.  Then will come the avid shooter who claims that the lighter the bullet, the more you have to factor in wind speeds when taking shots over 300 yards.  Unless you’re taking a crack and Usama Bin Ladin, I’m not so sure you need to be flinging rounds downrange at an animal.  Circumstances vary, but you really need to do some practicing if you’re going to attempt shot like that in the wind.  I personally have some military training, but my best training probably came from when I was 13 years old shooting my .22 at a pond.  We’d practice shooting from 300 to 700 yards away.  From memory, shooting a .22 at 300 yards away, you better be aiming about 10 foot high.  Anyway, there is a little more science to it now with range finders, wind speed doohickeys, etc.   I’m going to stop before I start quoting movies and referencing the rotation of the earth as a variable in long-range shots.

It’s common for people to site using a “brush gun” in efforts pursuae you into believe that a 30-06 is the “best” North American Hunting rifle.  The insinuation is that the 300 mags and larger calibers will just blow through branches and keep going straight at your target.  Well, that depends if the branch is 10 feet in front of the Kentucky trophy whitetail or the bullet strikes the branch 10 feet after it came out of the barrel and had to continue another 100 yards to the target.

The logically outdoorsman of the group will pipe up and ask you how far do you usually kill deer at?  Most of us will say, “About 75 yards”.  Usually most people will agree to this and realize the debate over the best hunting gun sounding fun at first, but we all end up agreeing that you really don’t need to get to specific or specialized.  Whatever gift you happen to have received from a wife or whatever you inherited will do just fine for a deer hunting gun.  I personally have a 30-06, but that’s only because that was what my friend’s dads claimed was a gun that would “take down any animal you need to be shooting out.”