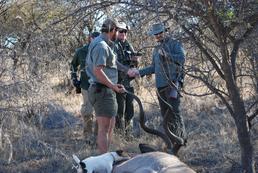 The most exciting time of the year is gun season!  Modern firearms is when often times new deer hunters and even old timers get a chance to go out in the woods and harvest themselves a Kentucky trophy deer.  For many folks, it’s a time to go to deer camp, sit around by the fire and have some good food and watch movies.  Of course a few drinks and an occasional poker game will break out as well.  Random people pop in the door to showoff their Kentucky trophy whitetail and story; it’s just a great time to be an outdoorsman.  A lot of the credit should go to the great job the Kentucky Department of Fish and Wildlife for their well managed programs.

When you’re new to hunting in general, there will be a friendly debate on how much more skill it takes to harvest a buck with a bow vs. gun.  If you’re new to bow hunting, everyone knows that shooting a deer during archery season a lot tougher; it’s no secret.  The reality is Kentucky outfitters will cater to the gun hunters because sometimes their time is limited.  They want to experience the thrill of being in the presence of a large buck, but that have jobs that doesn’t afford them the time off that say seasonal construction workers have.  A lot of these people would love to spend several weeks in the woods and come home early from work to get out in the woods, but some people just have demanding jobs where they can’t do that.

Modern hunting with a Kentucky outfitter isn’t cheap because the success rates are through the roof!  You’ll be able to shoot a buck any place you go, it’s just deciding what your standards are.  Some Kentucky hunting guides require 130 inch deer to be shot while others, like myself, requires you to count 8 points before you pull the trigger.  I’m not a fan of fines for shooter deer that are too small, but mature buck management is essential.  Sometimes making friends or customers pay with their checkbook is the best way to police people from shooting all the younger bucks.  There are Kentucky outfitters that simply score the antlers and make you pay by the inch.  I’ve seen some prices and rates average about $7,000 and toping $10,000 per trophy deer.  It’s all relative.