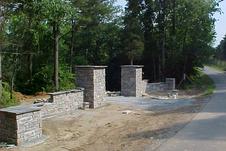 I didn’t always have a groomed Kentucky deer hunting outfitters paradise.  The idea of owning a bulldozer and a backhoe to make your deer hunting experience the bet it can be was never even contemplated.  My hobby turned into a mild obsession likely to appease the ADD I was never diagnosed with as a kid.  Thank goodness!  I would have made excuses and not made it to my middle class job as  school teacher.  Getting beat with a belt was my medication.  And just like medication, the effectiveness would wear off and I’d need another dose.

Prior to offering Kentucky deer hunts for sale, my first “deer camp” was 12 acres backing up to state land.  I think I paid $25,000 for it. There was a converted camper, like one that would fit on the back up a pick up truck, connect to a small 6X12 permanent structure.   I had 2 blind built and invited my brother hunting to the camp.  I think we stayed the night once or twice, used the wood stove; it was fun and a certain memory I had forgotten about.  He had saw a few deer, but no shots were fired.

My second deer camp didn’t really have a “camp” on it.  It was 40 acres backing to state land.  I didn’t shoot any deer on that piece of property either; not exactly Kentucky deer hunting at its finest. And still at this point there were no aspirations of becoming a Kentucky deer hunting outfitter.

The next deer camp was also a development backing to state land on 3 sides, but I was keeping the corner 2 acre piece.  It was backed to 1,000’s of acres of state land.  It was basically a garage where I had poured the concrete floor.  It was probably a 24X40 structure.  I don’t remember doing a single Kentucky gun hunt or bow hunt here.  I think I just built it and had a poker camp one year with maybe 20 guys.  Still, no real interest in becoming a Kentucky deer hunting guide.

My final Kentucky deer hunting property was about 190 acres initially that was offered right next to my grandparents 80 acres.  My brother ended up buying that homestead, so when the land next door came up, it had to be bought.  I build a nicer ¼ log 24X40 2 story cabin.  It has some nice furnishings, but being a middle class guy, still nowhere near these other Kentucky deer hunting outfitters.  I wasn’t quite finished because I wanted an “off the grid” cabin deeper into the woods that I could be happy in even if the country’s market crashed, we had hyper-inflation and a minor civil war broke out.  I wanted to be able to watch TV and have lights via solar power.  I’ve backed it up with natural gas lights.  It’s my Kentucky deer hunting paradise now.