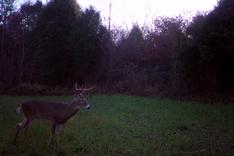 Kentucky Department of Fish and Wildlife

The Future of Kentucky Hunting Outfitters

In the more "commercialized" hunting states, I feel the government's rules have been dictated by the rich outfitters with influence.  Fortunately for Kentucky we haven't been infiltrated by the overbearing influence by the wealthy people who buy up land to sell deer hunts for profit.  The people at http://fw.ky.gov work for the people of Kentucky and do not try to overstep the will of the taxpayer.

Kentucky deer hunting can still be done by the "little guy" without fear of being bought out by the super rich dictating special $2,500 Outfitter licenses.  Where do you think "we" will pass on those extra costs?  In all reality, the big deer outfitters of other state LOVE these licenses because it stops the small farmers with property from selling hunting and leasing rights for the purpose of hunting.  As a result, people wanting to hunt deer on property that has managed food plots have to pay $1,500 - $4,500 to deer hunt.  Also as a result, it allows the richer people who have inherited property to put a choke hold on the market and control who can sell deer hunts and turkey hunts.  Because they have so little competition, prices are higher and it prevents the simple "school teacher" (like myself) from being able to do what he loves and charge money in the process to help subsidize his passion.  The money I bring in is a by-product of what I like doing; it's not why I do it.

It simply seems un-American what other states do to the "little guy".  This explanation is the simplest way to see how big Government and regulations impacts not only the smaller "deer rancher / property owner" but also the Kentucky whitetail deer hunters he services.