Why I Have Great Kentucky Turkey Hunting 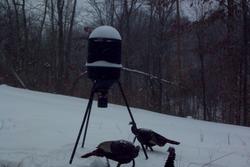 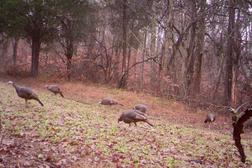 Turkey require a certain habitat that allows them cover and concealment in addition to a route for a quick escape.  They don’t like being in thick brush because that would allow for a predator to sneak up on them prior for them taking to the air.  Great Kentucky turkey hunting has to have these elements on the farm to keep the turkey around.

We all know turkey have great vision, so they want to take advantage of that.  Now, they won’t be stuck in the middle of a 600 acre corn field with no trees to reach.  They can’t fly like normal birds and stay in the air for miles.  They love food plots with a little bit of open space between them and the “woods”.  In fact, it’s good foot plotting practices to seed your chufa, clover or what not a good 15 feed from the “edge” so that you are creating a predator opportunity to ambush the unsuspecting turkey.   Due to the terrain features in the Blue Grass State, Kentucky turkey hunts are becoming more popular because we can keep a solid population of the birds.  They aren’t so rare that you can’t see them on almost every hunt, but they aren’t so easy to shoot that it makes it not fun.

Kentucky turkey, as in all breeds of turkey, will bust you if you make any sudden moves that are not cloaked by good background camouflage.  Turkey aren’t like cows where they are facing all the same direction.  The larger groups of turkey have scouts, rear security, and all those in between looking in every direction.

And above everything, preditors play one of the more important roles in having a good Kentucky turkey hunting experience.  The success of Kentucky deer hunts relies